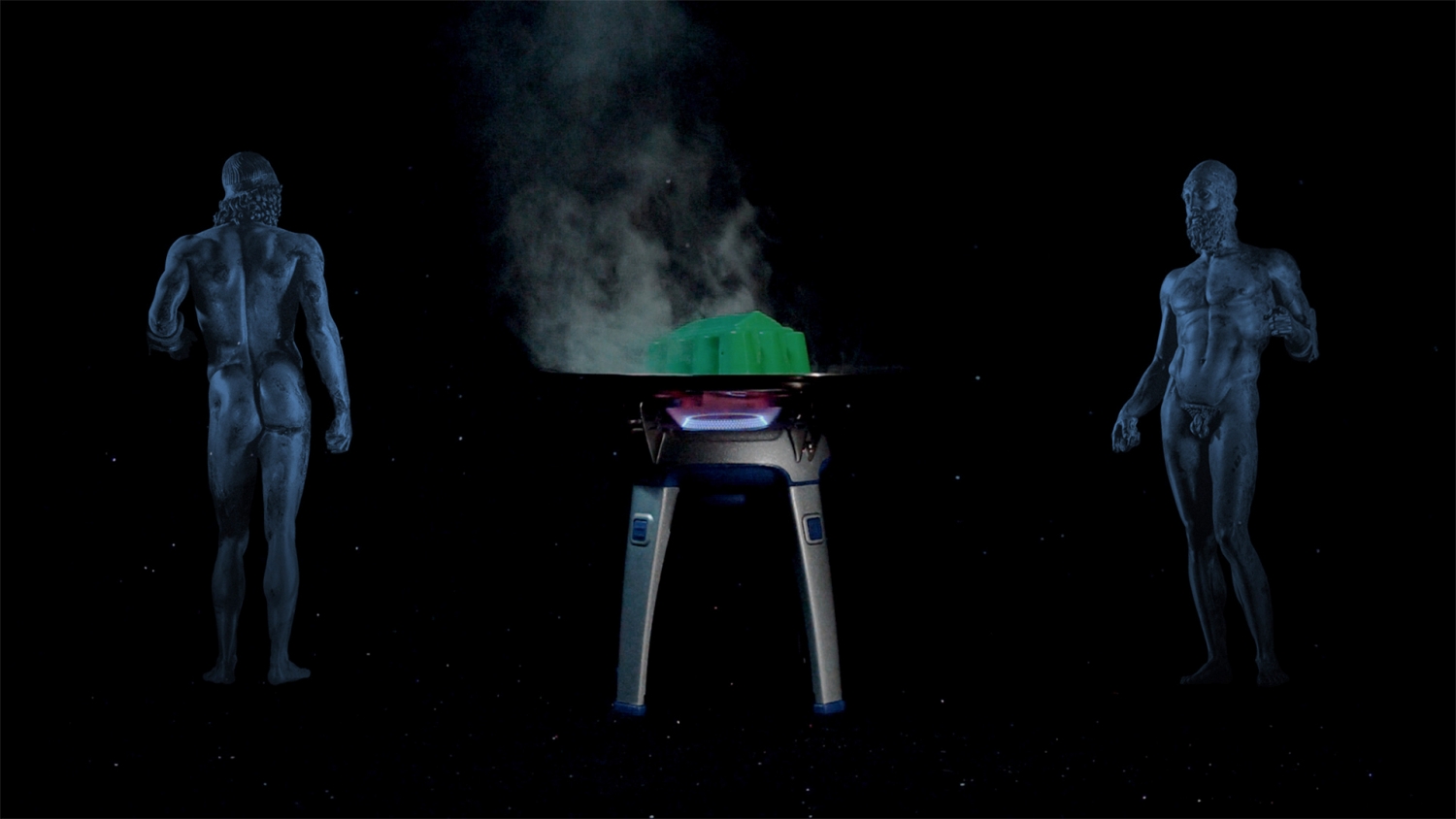 Intersecting the languages of photography, installation, sculpture and video, Nikolai Nekh’s work takes place amidst the recurring backdrop of speculative exercises that are inspired as much by small everyday moments as by a wider reality, of facts as well as conjectures, of analyses of societal development and transformation, of paradigms of knowledge and organisational systems, of ideological enterprises, aesthetic canons and the cultural, economic, political and social models of different historical eras and periods.

In his new video Achille’s Heel [Calcanhar de Aquiles], presented at MNAC — Museu do Chiado, the artist embarks on a journey through time, structured by a fictional plot narrated in voice over by a ghostly figure, who, in building a chain of connections between the raw materials and energy sources that have existed in different periods of history, explores the inter-relationships between these industries and technologies and the representation of movement.

Using an extended time period as a basis for examining the hypothetical genealogies, hegemonies, mutations, impacts and consequences of civilizational, social, political, economic and ideological enterprises and contexts, the roots of Achilles Heel’s narrative stretch back to Classical Antiquity. Nikolai Nekh creates his own historicization and speculation of this theme, invoking classical history and philosophical and mythological references (such as Plato’s Cave), as well as modern history, colonialism, imperialism, experiences of governance and the developmental models of con- temporary societies.

In its evocative journey, Achilles Heel touches on the formation of Western thought, politics and technology (through its in- vocation of the Parthenon and the Taj Mahal), hinting at the col- lapse of Greek city-states and the emergence of ancient and modern imperial powers, from the incorporation of coal technology to the British Empire’s domination of India, from James Watt’s steam engine to oil exploration in Siberia.

In this context, Achilles and his proverbial heel take on a decidedly symbolic importance that transposes the vulnerability and fragility of the Greek hero (the son of Peleus, symbol of violence, and Thetis, symbol of metamorphosis) onto a historical narrative of technological and industrial progress.

Distancing himself from both an optimistic vision and a fatalistic view of history, Nikolai Nekh leaves open other possibilities. His use of materials that resemble the totalizing and systematising narratives of modernism serves not to legitimise them, but offers, rather, a critical reflection on rationality, evolution and progress, with their paradoxical correlations of imperialism and colonialism. Achille’s Heel, to be sure, is a reflection on economic and political dependencies, the historical relationship between man and nature, the consequences of technological possibilities on social equilibria, and the importance and meaning of economic and ecological sustainability in the evolution of humanity today. But in its formal invention and thoughtful insertion of subtle humour and anachronism, it also distances itself from the gravity of its theme to con- struct mechanisms for interpellating the viewer. The suggestion of a virtually levitating heel, the precarious nature of fire and the fleet- ing passage of memory add up to a world fascinated by the synthetic power of art and its montage.

One of the recurring elements in the video is the representation of a partially flexed leg hewing to the classic model of Greek statuary. Another is the presence of countless heels as well as the im- age of Achilles in British artist Thomas Banks’ statue Thetis Dipping Achilles in the River Styx, created in the year of the French Revolution. Beyond the evocations and synchronisms of history, the interest of contemporary artists in classical art and ancient sculpture owes as much to a fascination for canons and for rules for representing the human body as it does to a more contemporaneous fascination with the artistic and patrimonial value of a history forever rekindled by power and imperialism and to its increasingly controversial chapter involving the plundering of national treasures.

In the video, the composition of the image is an essential tool. Incorporating digitalised photographs from printed books and references from the Internet, Nikolai Nekh combines elements from various sources, creating images of bold symbolic and metaphor- ical meaning, akin to the crabs who can recall the organisational workings and systems of a mine. More discrete is his articulation of a number of images in which he recreates a basic scheme using a diagram documenting a colonial relationship; in this case, between the British and the Australians.

Beyond referencing the models used by analogue culture in representing and organising images and knowledge, what distinguishes Achille’s Heel is precisely its appropriation and transposition to a visual milieu that is decidedly distant from the static qualities of reproduced images, one in which the paradigms for thinking and perceiving the world are associated with the aesthetics, set- tings and narrative codes of digital culture itself, where its porous borders with mass culture and the hybrid territories between art and popular culture are fully assumed.